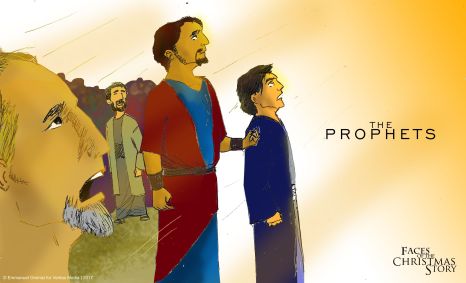 ‘Going through a long line of prophets, God has been addressing our ancestors in different ways for centuries.’ Hebrews 1:1

When we think of the prophets, much of the time we imagine old men with flowing beards bellowing words of doom with glazed eyes, ready to rip their clothes at the slightest hint of blasphemy from their audience. Well, some of them were like that. But some of them were kings like David and government officials like Daniel.
Whenever God wanted to let His people in on what He was doing, He spoke to His prophets who would then speak to the people. So, no, these prophets were not ‘fortune-tellers’.
The people of Israel lived through some of the worst times. From slavery to finding a homeland, to raising a kingdom, to occupation by invading armies, to a scattering and an exile and the plundering of their land, to their return to that land, to another invading army coming in … phew! Talk about a rags-to-riches-to-even-more-rags story! But in all this time, God did not leave them alone to face it. He had His prophets among them, men who would speak to them exactly what God needed them to hear. Sometimes theirs were words of judgment, sometimes they were words of comfort. But one thing the people of Israel knew was that God had not abandoned them. These prophets were given to God, faithful to Him so that they could be effective mouthpieces for Him to inspire His people.
In the midst of their prophecies and teachings, the prophets were inspired of God to utter and write about His Big Plan: God was going to save them! God was going to raise someone who would bring them to a prosperous place, a King that would bring them home and restore their glory. While these prophets had glimpses into these plans, they did not fully understand it, but they wrote the prophecies as they were inspired by God. Some had their contextual interpretations, but they did not fully know.
They told of how he would be born from the tribe of Judah (Genesis 49:8), from the family of Jesse (Isaiah 11:1) and a descendant of King David. They told of a ‘son’ that would be born to rule them in a peaceful and never-ending kingdom, who would also be the ‘Mighty God’ (Isaiah 9:6-7). They told of how He would be born in Bethlehem (Micah 5:2).
What they didn’t realise was that they also spoke of the same Person when they prophesied about an anointed one that would be killed for the sake of others (Daniel 9:26), a suffering servant that would be scourged to bring healing to others, be rejected and despised, stricken for the sins of the people (Isaiah 53). They probably thought they were describing their own pain and agony when they wrote about someone that would be forsaken by God, be pierced (long before crucifixion was even invented), and whose clothes would be gambled over (Psalm 22). They probably didn’t even link it all together when they wrote about someone who God would not leave in the land of the dead, but would raise to life (Psalm 16:10). They didn’t know this was all God was talking about when He talked of giving them new hearts so they can always do what is pleasing in His sight (Ezekiel 36:26-27)
Only later, by the inspiration of God’s Spirit, would the apostles look back and see the road map God had prepared long before, telling of what He was doing. They could look on this, gain more understanding, and edify one another, confident in God’s faithfulness to His Word. (1 Peter 1:10-11)
The Prophets lives were not wasted, however, because in the time before God would become a Man and set things right, these were the people He used to bring comfort to those around them. Telling them that God was still with them. They too were human with their failings and doubts, fears and questions. But God used them. And they knew there was something more coming, and they looked forward to it.
And God fulfilled His promises, by Himself. He became a Man and fulfilled all He had promised He would. Just as He had said.
Like these Prophets, the circumstances around us may seem to cloud our understanding of God’s Word. They may even make us doubt if He is even there. It may look bleak, like we are all on our own. But we are not. The grace they prophets looked forward to has arrived in the Person of Jesus. He has promised to never leave or forsake you (Hebrews 13:5), and He is true to His Word. He is alive in you, making you who He wants you to be. His promises for you are true, and He makes sure they come to pass.
Even when it doesn’t look like it. He is faithful and reliable, and you can trust Him, and in Him. Trust in His Word, in what He has said.
You don’t have to be in the dark about His faithfulness to you anymore. He won’t leave you in the dark. The Light has come. This was what the Prophets looked forward to. Now God can be known by all. Everyone.
Even you.
Trust Him.
The more you experience His love, the more it becomes a part of you beyond facts, and the more you can be a blessing to others. And they will see Him in you. That’s a life fulfilled.
It’s what God intended.

‘Going through a long line of prophets, God has been addressing our ancestors in different ways for centuries.
Recently he spoke to us directly through his Son…’
Hebrews 1:1 and 2

Life, hope, faith … with some humor!